When our studio was brought on to design the sound of the new King’s Quest games, we were all extremely excited at the prospect of continuing the legacy of such an influential series. With the recent release of the epilogue, we wanted to take some time to discuss our process resurrecting such an iconic franchise. One of the most exciting opportunities was modernizing a series with such a long-­?standing history while maintaining the core sense of wonder and whimsy the games are known for.

It’s been over a decade since the last installment was released, so when I found out I would be working as Lead Sound Designer on the project, the first thing I needed was a bit of a refresher. I made sure to play through all of the old titles in the series before starting work on A Knight to Remember. The return to the land of Daventry should feel like greeting an old friend, and we wanted to encapsulate that feeling through sound as much as possible. During my playthroughs I created a list of sounds we could reference or incorporate into the new series to help drive that feeling of returning to a familiar world. 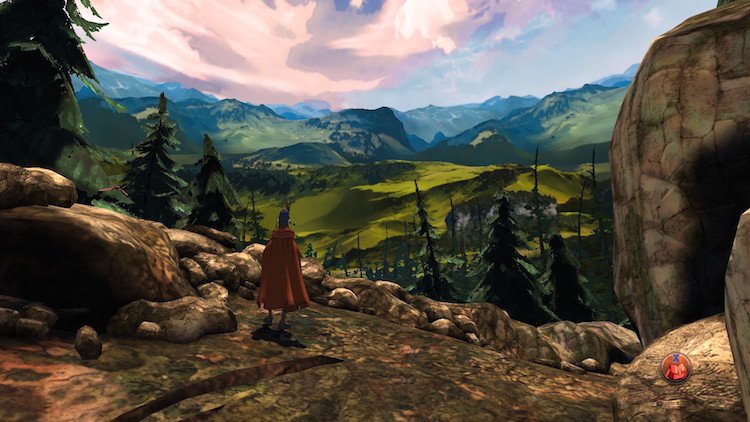 While the original games were certainly pioneers of video game and sound technology, audio capabilities have grown exponentially to what we expect today. Early entries in the King’s Quest series contained very little sound content compared to today’s standards; however, there are a few sounds that became iconic. The most memorable being a chime that occurs when obtaining a new item. Thinking it would be nice to bring back this chime as a callback for fans, we recreated the sound from King’s Quest 6. The initial synthesis of the sound was done in FM8. To make it sound more retro, I scooped out the lows and highs and added distortion and saturation with the plugin Lo-Fi. These moments of harkening back to the sounds of King’s Quest past are elements we incorporated throughout the series.

More important than the resurrection of specific sounds was staying true to the overall feelings and themes of King’s Quest. The series is known for its fantasy, wonder, humor, quirk, and charm. These attributes are certainly present in the new game and are things we constantly tried to convey with the sound.

Whereas many adventure games today task you with grim and weighty decisions, King’s Quest basks in its levity. The story’s framing device ensures that Graham will survive the tail, so while peril certainly exists in the world, it’s more about how Graham overcomes his obstacles than the danger they represent.

It was important for us to support the story and visual levity with the sound. Character movements are accented with whooshes, cracks, bells, whistles, and springs to exaggerate motion and identifying character traits. The comically large knight Acorn, for example, bounces around with the thud of a timpani and trips with the slide of a whistle, the crash of a cymbal, and the boing of a spring. The fast-­talking, hyperactive merchant on the other hand whooshes around the screen with various whips and snaps. 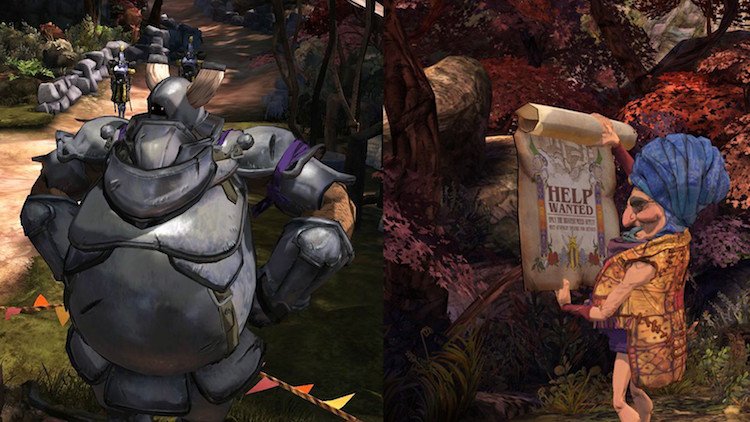 While certainly an inspiration, I didn’t want to get too far into Hannah Barbera territory. The world of King’s Quest is so lush and realized that a character still had to sound appropriately substantial. Still, we wanted almost nothing to sound too dark or gritty. Our Foley especially was EQ’d to remove plenty of low-­?end mud and definition. When we wanted certain sounds to really stand out, it was usually a matter of pushing the high end through a multi-band limiter or clearing out other extraneous clutter and noise from the scene. At its core, King’s Quest is about a grandfather sharing stories of yesteryear with his granddaughter so we always favored charm and humor over gravitas.

King’s Quest has always used comedy as a driving element and this game is no exception. Even death carries humor as the elderly Graham quips about his unreliable narration over a failure screen. Humor in sound relies on the same principles as comedy through other mediums. Playing with expectation, exaggeration, and timing is key to making things sound funny. Some techniques that we used to add humor, silliness, and playfulness included the following:

We used sounds with naturally pronounced pitch modulation to add motion and expression; frequently calling upon squeaks, whistles, whooshes, zips, and bounces as well as adding modulation with pitch-over-time plugins such as Waves SoundShifter.

Instrumental accents have long been a staple of cartoon humor. We often used them to add playfulness to impacts that would otherwise have seemed severe. They also served as relatable tropes to easily identify character traits (such as with Acorn, described above).

Hearing the same sound repeated in different contexts can set up the anticipation of an “in-joke.” For instance, Graham is often falling down or being hit by things. We set up an expectation for this by keeping the base sound for all Graham impacts the same.

Conversely, subverting expectations with audiovisual juxtaposition can also have a big payoff in comedy. Things like having a mundane scene sound epic or a heavy character sound delicate can catch a listener off guard and add ridiculousness.

We also tried to extend the charm and expressiveness of King’s Quest to the creatures of Daventry. One of the first fantastical creatures encountered in A Knight to Remember is a fire-­?breathing dragon. Though a hulking beast chained to the bottom of a well, we aimed to keep the cartoonish nature of the visuals present in its sound.

The base vocal layer of the dragon was created using the vocal processing plug-­?in Dehumaniser. Dehumaniser is outstanding for creating custom monster layers in real time using a robust set of processors, noise generators, and synthesis. It allowed for the use of “vocal Foley” to match the small motions and mannerisms in the dragon’s animations very quickly— something that otherwise would have taken hours to cut in convincing detail. On top of this, I used layers of lions, leopards, buffalo, birds, horses, gas bursts, and rocks shifting for extra definition and personality. Layers of pitched dog moans and cries were also used to make the player more sympathetic to the dragon’s plight. This is important for the player to be aware of, as they are given a difficult choice in deciding its fate.

Besides the dragon, there are a plethora of quirky creatures in the game.

Graham’s trusty mount Triumph was created using layers of guinea pig squeaks, pig snorts, horse vocalizations, and leopards breathing. The badger was mostly actual badgers mixed with cats, dogs, and various other critters. The many squirrels were created with chipmunk chatter, pitched sheep, insects, and one instance of a very tasteful, pitched-­?beyond-­?recognition Wilhelm scream. Because these animals are more expressive and cartoony than realistic, human vocalizations played an important role. Even with processing and manipulation, the human voice makes the creatures easily relatable for players. It often proved an integral emotional layer missing from regular animals.

Like every project, King’s Quest had some unique challenges and irregularities to work through. One such challenge is the game’s branching storyline. Certain actions and paths taken by the player open up unique sections of the game or customized cut-­? scenes. Some of these player choices will even carry over across subsequent chapters. Keeping track of all these possibilities was a huge undertaking and required lots of organization and testing. Having sessions and trackers aggressively organized from the start for easy revisions and iterations was invaluable to not getting overwhelmed by the massive amount of variation.

An adventure game first and foremost, players can devote hours to traversing the world and finding hidden possibilities. Because of this, we had to make sure none of our player movement sounds caused any sort of fatigue. Footsteps, Foley, and UI couldn’t be abrasive as you would hear these sounds often and in many different settings. It took us nearly five months to find the perfect footstep and Foley balance for Graham. This process involved tweaking volumes as little as 0.5 or 1dB, living with the changes for several days, and tweaking them again and again.

Certain gameplay and presentation mechanics also caused interesting ramifications in the implementation of sounds. The game features a fixed camera that automatically positions and moves itself throughout levels leaving the player with zero control over it. This caused issues with anchoring sounds at their literal space in the environment, as the listener’s position relative to the audio source would frequently sound unnatural or annoying when things left the camera’s field of view. Lots of testing and intense collaboration with the developer’s amazingly dedicated audio coordinator went into making sure that everything was placed correctly in game. Using no audio middleware, every sound in the game was implemented directly into Unreal 3. To fill in some of the gaps, we also built some custom mixing tools for volume specing and mixing.

King’s Quest has been an absolutely gorgeous and engaging project to work on. The Odd Gentleman’s enthusiasm for creating this game and preserving the integrity of past King’s Quest games is evident in the dedication and love they have put into the game. We hope we have been able to instill some of that dedication into the audio experience.